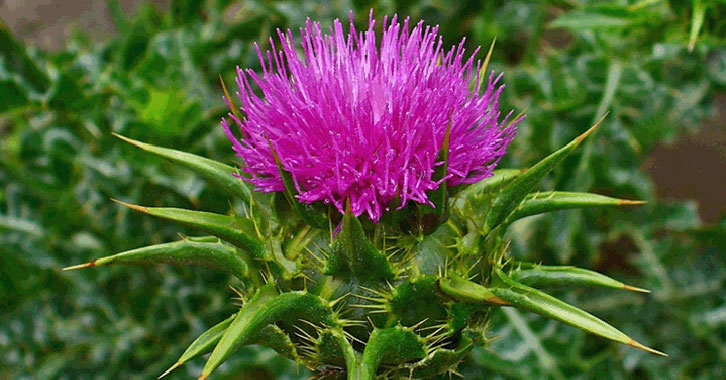 Centuries ago, thistle was used to cleanse the liver, gallbladder, detoxify blood and improve kidney function. Thistle is not very widespread in our time, however based on its characteristics it is considered one of the most beneficial herbs. The German pharmaceutics characterizes its extracts as a medicine for digestion disorders and body damages from toxins and poisons, as well as enhancers for the elimination of inflammatory diseases.

It develops mainly in temperate and Mediterranean climate and is found almost all over the planet.

A key element of thistle is silymarin, a flavonoid that has antioxidant, anti-inflammatory and antiviral characteristics. Contributes to the reconstruction of tissues and exterminated kidney cells, mobilizes DNA-RNA for increased function, contributes to the synthesis of proteins in renal cells and prevents toxins from entering them, while eliminating those that managed to be introduced. Silymarin contains 3 ingredients, silyvinin, silicristine and silidianine, which according to research have a detoxifying effect and protect the liver, as well as contribute to the recovery from hepatitis and cirrhosis. (Source: Nutrition/Health & Wellness)

The most beneficial elements of the plant are the seeds which contain the beneficial flavonoids and are collected in late summer.

Herbal therapy nowadays uses thistle as a medicine to protect the liver from alcohol, chemotherapy and infections.

It is used to fight diseases such as:

Used to support the body:

According to a study in the journal Phytotherapy Research, thistle, with the contribution of the substance “sylymarin”, contributes to the reduction of the blood glucose content, since it keeps insulin amounts in balance and helps to reduce triglycerides and cholesterol.

Because of its detoxifying characteristics, it helps to break down fat and thus to slim. In addition, the consumption of thistle contributes to maintaining the proper functioning of metabolism by eliminating toxins coming from the environment.

Most of the plant is edible after cleaning the thorns. Cook the leaves (after cleaning them) or eat them raw while they are fresh. In addition, the root and its stems are very nutritious, are eaten raw or cooked and are delicious with significant nutritional benefits.

To make a drink from the seeds of thistle, make a mixture of 1 cup of hot water and 2 teaspoons of herb and after 10 minutes when the nutrients will be diffused, strain and consume it (no more than 2 times a day consumption).

It is considered as a safe herb, but mild side effects such as stomach ache or allergies have been observed.

It is not indicated for consumption by pregnant women and children so as to avoid any possible side effect.

The role of the above text is informative and for any official advice, before consuming an herb, we always turn to a qualified doctor for excellent guidance and of course faithful adherence to his instructions.

The greekblacksheep.com recommends the Wellness Tincture Tint 48 and the Detoxifying Extract Tint 01

Your nature-inspired supplier of all-organic and fresh produce for all your daily needs. We offer skin treatments, nutrition advisory and more.